Featured by XDA-Developers: "Automatically rename and organize your photos with Picture Manager"
Download APK
0/5 No votes
Report
Developer
j to the 4nVersion
4.71.0
Updated on
December 28, 2021 Requirements
7.0 and up
Size
39.1 MBGet it on

Picture Manager makes use of EXIF Metadata to rename and organize your pictures.

What Picture Manager Premium APK can do for you:

Rename your pictures with different timestamp formats and other EXIF metadata like camera model, manufacturer and many more.
Additional options are:

The organizer also offers a feature to move your images to your external sd card or even USB Storage.
In the premium version that can be done even automatically.
A useful use case is also to move Videos to another location to prevent Google or Amazon Photos to sync them to the cloud.

Clean up your images collection

Picture Manager offers a duplicate image finder to get rid of duplicate images and restore some space on your phone memory
Also, there is an option to find similar images based on PHash and AverageHash algorithm.

Edit EXIF metadata directly in Picture Manager, either single images or in batch mode.
Use conditions to only edit EXIF attribute matching them.
Some special features:
Set date on multiple images and increment the time with hour/minute/second
Set the date and time delta on multiple images (to fix wrong timezone time for example)

The premium version is an in-app purchase and unlocks the following features: 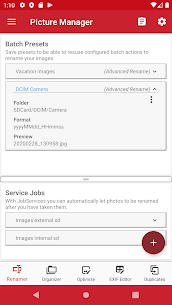 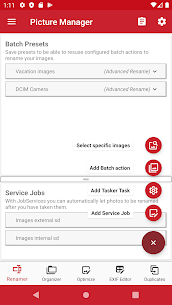 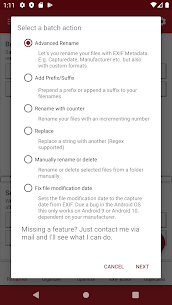 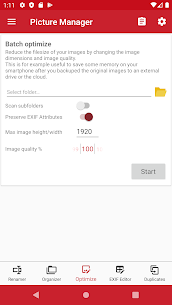 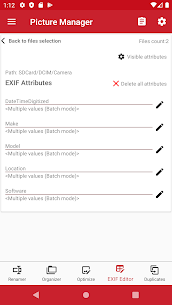